"Optimism" ~ Donation to the 2018 Charity Box Event at Lattimer Gallery 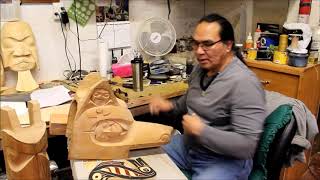 Which Wood Would Yew Choose?

Before there was Friendly Cove, there was Yuquot. It was a bustling trading hub that attracted people near and far from all sections of the west coast. Every summer, this windy little village welcomed traders, hunters, and fishermen to stay ashore and reconnect with family. There were parties, games, weddings, trading, and activities that brought like-minded people together such as carvers, weavers, drummers and dancers. The population each summer soared in to the thousands.

It was akin to the Las Vegas of the west coast for the Nuu-chah-nulth people.

Aside from a necessary lighthouse that was required by the Canadian coast guard, Yuquot was spared from progression after European first-contact. The Mowachaht were left with the anglicized name of “Friendly Cove” and a still-standing church that was built by the Spanish. To this day there are no roads, no electricity, no telephone lines, and no McDonalds. If you plan to visit Friendly Cove, unless you are staying on your own vessel, be prepared to rough it old-school. If you travel by speed boat from the Gold River docks, the trip can take about an hour. Once there, you’ll need to stabilize your surroundings, farm your own water, and understand that you won’t have the ability to contact family and friends unless you use a VHF radio. (In other words, tell the kids that there’s no wifi.)

When you walk along the pebbled beaches of Friendly Cove, you are in fact enjoying the same view and environment that the Mowachaht might have had thousands of years earlier. Imagine dozens of dugout canoes beached in the cove and the smell of salmon smoking between cedar sticks. The people would walk barefoot from the water to the longhouses to inspect wares for trade and to visit with old friends. In the summer, it would be alive with the sound of drums and people singing. During the rain, the gatherings would take place in the big house.

Today there is only one house that sits on the land: Sanford's parents’ home. When they say that they are the “last of the Mowachahts” it's no exaggeration. The people who were eventually enticed to leave the land in 1967 to live on the reserve in Gold River never returned, even to live at Friendly Cove seasonally.

Every summer, the land is open to all Mowachaht members and guests for the “Yuquot Campout”. In some small way, this get-together keeps the tradition alive of how the people would commune together during the trading season. Only instead of trade, the people just gather together today to socialize and enjoy a short time off-the-grid.

For thousands of years, Yuquot was a district of the west coast that welcomed everyone who found its shores. It’s this reason why Sanford was asked by his band to carve The Welcome Pole that faces west on the back beach in 2012. Wherever you come from, and for however long you visit, just like the Mowachaht ancestors, the people will always welcome you.

As for the wildlife, they might welcome you too, so bring some bear spray!